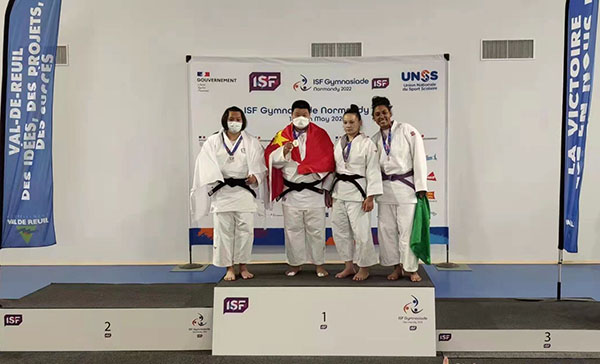 On May 19, at the just concluded ISF Gymnasiade Normandy 2022, Niu Xinran, an 18-year-old judo athlete from Jizhou district of Tianjin, won the world championship of the women's judo heavyweight (78 kg).

Niu perfectly used her skills at every competition and easily won against her rivals with overwhelming strength in the final. Niu comes from Sangzi town in Jizhou. In 2018, Niu joined the Tianjin judo team and displayed excellent strength. She has won a number of gold medals at such competitions as the national high school judo tournament, the Beijing-Tianjin-Hebei judo invitational competition and the women's judo heavyweight (70 kg) at the national junior judo championships.

“I have conquered many difficulties to win the championship. I appreciate the support of the whole team and I will make further efforts to win honors for my country and hometown at the 2024 Paris Olympic Games,” Niu said at event's awards ceremony.