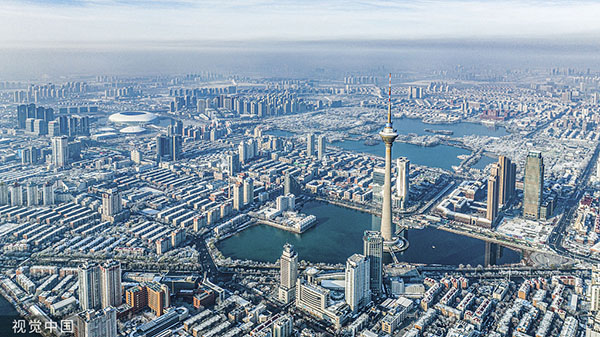 Jizhou district in northern Tianjin launched a coal mine rehabilitation project recently, covering an area of 220,000 square meters, with an investment of some 120 million yuan ($18.84 million).

The project, which is due to be finished by January 2024, is part of the district's massive campaigns for mine rehabilitation over the past five years, with the total area reaching 2.8 million sq m, said Liu Xiangfeng, deputy government chief of Jizhou.

The district boasts the largest area of greenery resources in the municipality and has also seen Yuqiao Reservoir and its northern mountainous areas receive a syndicated loan worth 34 billion yuan from the Tianjin Branch of China Development Bank to support its ecological preservation in recent years.

All the efforts reflect Tianjin's solid steps to seek green development, said Xu Yingwu, vice secretary-general for government affairs of Tianjin and spokesman of the city.

The efforts also indicate that the city is beefing up a push to peak carbon dioxide emissions by 2030 and achieve carbon neutrality by 2060, and turn more fresh air generated from green trees into financial returns, Xu said.

Currently, Tianjin is building itself up to join the lineup of the country's green finance pilot zones.

Statistics indicate that Tianjin has seen fruitful results in its orderly and effective emissions trading market with a series of policies and measures that have been released since 2013.

The city's loan for carbon reduction and ecological preservation projects hit 403.9 billion yuan in 2021, an increase of 17.1 percent year-on-year, he said, noting that its growth speed ranked tops among all the loans for industrial sectors, said Wang Zhen, deputy director of the Tianjin financial work bureau.

Statistics from Tianjin's ecological and environmental protection bureau also indicated that in 2021, the trading volume of Tianjin's carbon market was 50.74 million tons, ranking second in the country.

This year, the city plans to include more enterprises in the electricity, steel and iron, and chemical sectors into the emissions quota system, which currently consists of 160 companies, said Zhang Tao, deputy head of the local ecological and environmental protection bureau.

All the companies with carbon emissions topping 20,000 tons are required to join in carbon trading, he said.

Diverse financial tools and products are in the pipeline for the city to cash in on the bonanza from the carbon trading market.

For example, State Grid announced it will increase its investment in its leading finance company in Tianjin this year and revealed ambitious targets in its product portfolio to create more financial products benefitting from the country's carbon-neutral opportunities.

Despite the booming market and the fastened pace in afforestation efforts, Chen Jinghe, president of Zijin Mining, told a forum in Tianjin that current scientific calculation methods of carbon emissions are now challenging the sector's further growth and need to be upgraded.

Echoing the requests like Zijin's, the city is mapping out a series of benchmarks to optimize the market and development mechanisms, Xu said.

According to a report by the Beijing Institute of Technology, China's carbon trading market is expected to top 100 billion yuan by 2030.