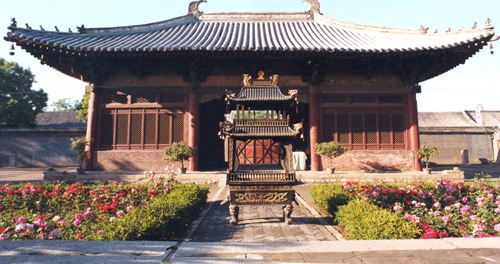 Dule Temple is a Buddhist temple located in Jizhou district, Tianjin. It was built in the Tang Dynasty (618-907) and rebuilt in the second year of the Liao Dynasty (984). The existing buildings of the temple include the front gate, Guanyin Pavilion, Eleven-faced Guanyin, Bodhisattva and the King Kong statues. The temple is of historical, scientific and artistic significance, and it is a unique treasure in China.

The earliest example of a front gate with Wudian roofs in China, the front gate of the Dule Temple stands 10 meters tall including the platform base, the body and the roof. It has Chiwen, or an ornament on the roof ridge in the shape of a legendary animal, the earliest example of its kind in China's existing buildings. There stand two Dharma protector statues and four statues of heavenly kings who look solemn and respectful. The three Chinese characters "独乐寺" (Dule Temple) inscribed on a plaque on the forehead of the gate were written by Yan Song, a scholar of the Hall of Martial Valor (Wuying dian) in the Ming Dynasty (1368-1644).

Guanyin Pavilion, the 23-meter-tall main building of the Dule Temple, is China's oldest existing timber pavilion. It appears to be a two-floor building from the outside, but has three floors inside under Xieshan style roofs. Guanyin Pavilion has two plaques handwritten by Li Bai, a poet of the Tang Dynasty and Emperor Xianfeng of the Qing Dynasty, respectively. It houses a 16-meter-high clay statue of Guanyin with eleven faces, one of the largest existing standing clay statues in China. On both sides of the Guanyin statue are bodhisattvas with plump faces, well-proportioned shapes and graceful postures. They remind one of the paintings of ladies in the Tang Dynasty and are a treasure of Liao Dynasty statue art.

The murals on the walls of the ground floor of the Guanyin Pavilion cover a total area of 135 square meters. With the theme of the sixteen arhats they display myths and stories of Buddhism. According to expert research, these murals were originally in the style of the Yuan Dynasty and were redrawn in the Ming Dynasty. They are examples of first-rate painting in China.

In 1998, following the completion of a maintenance project of the Dule Temple, the rear court room, the Palace of Emperor Qianlong and other ancillary buildings were renovated, and the environment was improved, with more services and a large number of tourism products added. The temple is now preparing its application for designation as a world cultural heritage.